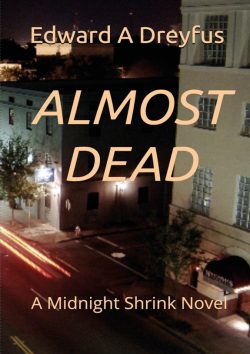 Dr. David Edminson is a thirty-six-year-old street-smart, iconoclastic clinical and forensic psychologist who works out of his customized van treating the inhabitants of Skid Row between midnight and 5:00 a.m. David’s patients and others in the area know him as the “midnight shrink.” He divides his practice between treating people in his van and his office in Hollywood, his work as a forensic psychologist with the LAPD and as a clinical professor at County-USC Medical Center, where he consults and teaches psychiatric residents and psychological interns.Someone is trying to kill David. With the help of his longtime friends, LAPD Detectives Sal Catena and Paul Burns, David goes after the would-be assassin. Is it one of his patients? Is it his girlfriend’s ex-con brother? Or a mafia capo with whom David had a run-in (in the first book in the series) when trying to learn about his grandfather’s underworld connections?