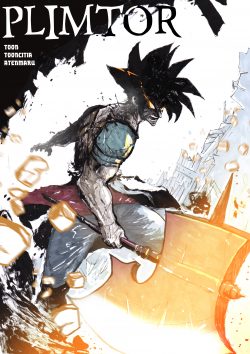 (ONGOING) Plim was created from wind, water, earth, fire, light, dark and nature energy from planets that had the highest energy readings. All of the energy was extracted and made into a living person named Asu. Nirano the creator of Asu sought to use her as a vessel. Asu woke up before she was completed and managed to escape. She then had a son named Exo, but since she wasn’t completed she died three years later. Exo inherited all of what was his mother’s and was confined to the dungeon of his father’s castle because he was different from everybody else. When Exo turned eight years old a portal opened in front of him, and he walked through and finds that he is on planet Thulobos. He meets five orphan kids by the names of Orothos, Flamdon, Bruuhm, Azuma and Isome. They become like family and lived poorly but happily. So eight years past and all of a sudden people all over the planet begin to develop plim. Two more years go by and Nirano gets a alert about planet Thulobus having a crazy plim outbreak. Mean while for the last six years the five orphans take up martial arts really serious, and begin to develop super moves. One year after Nirano gets the alert about the outbreak, he arrives at planet Thulobus searching for traces of what might be Asu’s. Destroying everything that wasn’t Asu or that had her genetics until he comes in contact with Exo. Threatening to destroy the planet, the five orphans step up to stop him. Nirano is forced to retreat, but before he does he sends a little message to Flamdon. Exo then goes off to investigate the meaning behind all of this. The five orphans make a name for themselves, and make the famous group known as the Aura Syndicate. Seventeen years later Geyia and Guyno set out for the plimtorian trails hoping to get the chance to join the Aura Syndicate, and to find their mother’s murder.