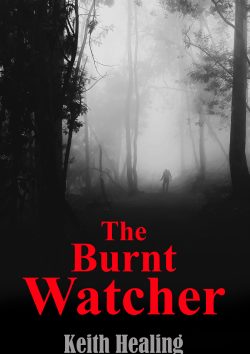 The Excise exists to keep the world safe.
This is done in two ways.

First is the Judiciary.
It understands local law and applies it evenly.

The second is the Watcher.
It understands Fear and fights it mercilessly.

Five hundred years ago the old world burned and the Fear rose from the ashes and the Glass. Watchers knew the Fear and found the ways of fighting it, enabling the world to be built anew.

Now the Fear is a memory, a story to remind people why they should not build with stone. The Watchers have all but disappeared, remnants of a time that has passed.

But in a small village in the west of England a retired Watcher suspects that the Fear is not as distant as people believe.

Something strange is going on in the village of Stonehouse and we set out alongside the eponymous Watcher and his two companions, in a very Steampunk contraption, to discover exactly what is going on.
The story is set in a neo-medieval post-holocaust future where things are both very familiar and very, very different. It’s Healing’s skill in conveying the atmosphere of the setting of his story with simple strokes that first catches the reader, comforting familiarity softens the otherworldly strangeness. Do not expect clear explanations of how this world came about, because they are not forthcoming, and nor should they be.
The story’s milieu reminds me greatly of John Wyndham’s The Chrysalids, no mean comparison, in its setting and its moody atmosphere.
The tale itself is part adventure, an exploration of a very different world, mixing both fantasy and science fiction, part detective novel and part horror. There is darkness here afoot and as we get drawn further into the narrative, a subtle dread settles not just upon the characters but the reader too. By the time we are two thirds of the way into the Watcher’s tale that dread has gained considerable weight, and we really need to know what the hell is going on in that village.
Though other characters are well thought out, as with most first person detective stories, we don’t get to really know them in depth, which serves well for that added sense of paranoia – what is going on and who is involved? Suspects, clues and red herrings abound.
I’ve been brought up on detective fiction, SF and fantasy, and I can spot a plot device a mile off and solve a TV murder mystery in minutes, but I must say I was enthralled by this one. Healing plots his story masterfully; something nasty is going on in Stonehouse but the reader is as much at a loss to grasp it fully as the Watcher himself.
I thoroughly enjoyed it and heartily recommend it. It’s clever, intelligent, thought provoking and compelling reading. I loved the post-holocaust world that Healing creates, the character of the Watcher himself, and the subtle way he gently layers fear like a ton of old musty blankets. I look forward to reading the Watcher’s next adventure against his new and terrible adversary with a mix of anticipation and dread.
Don’t go into the woods.
Mat McCall