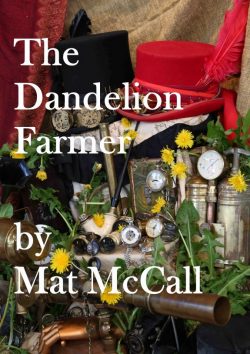 Steampunk meets Science Fiction adventure on the Wild Western Frontier of Mars. The Dandelion Farmer is a Victorian style Science Fiction novel set in the Martian colonies twenty-five years after independence from the old Imperial powers. Edwin Ransom is a young, idealistic botanical fuel grower, who is barely scratching a living out of the red earth. Edwin’s quiet life is intruded upon by the henchmen of Eleuthère Du Maurier, a ruthless fuel industrialist who wants to drive Edwin off his lands. As tensions mount, Edwin encounters Adam Franklin, a wandering amnesiac with a terrible secret. Intrigued by Adam’s mechanical hand and the mystery surrounding his lost memory, Edwin decides to try to help his new friend. However unknown to Edwin there is far more to Du Maurier’s desire for his land than just his craving for real estate and dandelions. As events spiral out of control, Edwin and Adam find themselves on a race across Mars for their very survival.

This book is available to buy from our store

A peer review of The Dandelion Farmer, by the novelist Mark Hayes.
Dandelions on Mars
Posted on August 31, 2021, by darrack1
I had a moment of genuine glee while reading last night as a spaceship from the planet Mars crashed into Surrey’s Horsell common in 1857… The astute and well-read among you may be able to guess why but to be clear, it is all to do with the date, 1857…

If you read one book this year on my recommendation (which surprisingly people do on occasion), read this one.