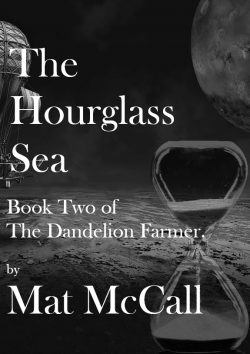 The Hourglass Sea is Book 2 of The Dandelion Farmer a Steampunk-style Science Fiction adventure set in the Martian colonies.
Escaping from an ambush at the Tomb found on his land, Edwin, and the Flammarion Expedition, desperately seek the sanctuary of home. However even darker forces than Du Maurier, are massing against them and fate is about to deal them all a terrible blow.
Questions remain unanswered; Why is Du Maurier so set on destroying Edwin? Who is Lanulos? Why was Adam brought back from the very edge of death? What is the change coming over Aelita, and exactly what is the enigmatic John Sydeian up to?
As war between the old colonies grows ever closer, the Expedition members find themselves trapped in a nightmare adventure that will take them far beyond their homeland and possibly beyond reality itself.