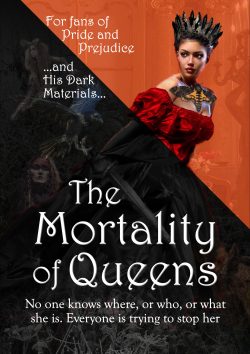 The Mortality of Queens

England 1792: every man and woman is bonded to an Umbra – a shadow self that inhabits the unknowable Other Realm. It’s a mortal bond, if either dies, they both do.
Arthur has summoned his Umbra, Amorrie, to attend a ball but she materialises naked, with a broken leg and covered in another’s blood. The ball is disrupted by news of the death of a Countess after her warrior Umbra was murdered in Amorrie’s world.
Among…

With the Roman General Gaius Julius Caesar on the verge of launching his second and much larger invasion of Prydein, the country he is about to invade is riven by politics and a failing religion.

Untimely death dances hand-in-hand with the murderous, Brythonic kind of power politics which grips the country from the threatened south coast to the most northern. The all-inclusive and Druid-led unity they had achieved the previous year and to so much… 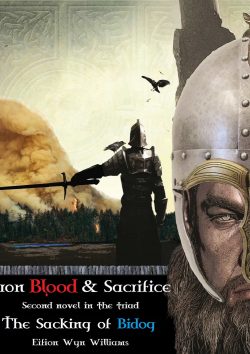 Britain in 54 BC, is a mysterious land clinging to the edge of the known world, and the Roman General Gaius Julius Caesar; the scourge of the Gauls is on the point of his second invasion. This foreign General and his monstrous army which threaten their southern coast, although beaten on their first incursion the previous year will return in much greater numbers this summer, and the ‘werrin’ of Prydein fear the worst. Their… 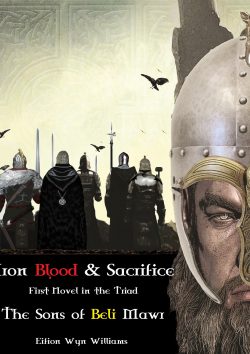 Unashamedly weighty, this iron-age saga brings to life some of Wales’ oldest and most revered heroes, those of Mabinogion fame. Lludd Llaw Ereint, Nynniaw, Rianaw, Caswallawn Fawr and Llefelys all walk again in this ground-breaking and entertaining trilogy. Never before have the invasions of Julius Caesar been told in this modern and contemporary way and from the Brythons’ perspective. Iron Blood & Sacrifice is a bloody romp through the palisaded hillforts of an ancient…

The Antonine Romans and The Gladiators

The Antonine Romans and The Gladiators
A Gladiator Fight at the Trimontium Amphitheatre, Scottish Borders, holds the fate of Tribune Lacitus & his family. His brother Centurion Antallius has his own battles to overcome!

The Antonine Romans and The Tribunue’s Mission

Tribune Lacitus must use all his skill if he is to save himself, his brother Centurion Antallius of Balmuildy Roman Fort and his father Senior Tribune Rexis of Trimontium Roman Fort. 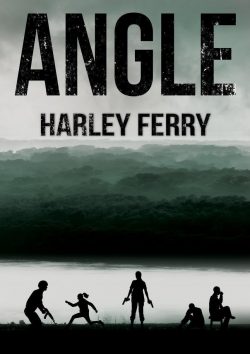 It’s been ten years since the Cuban Missile Crisis escalated into full-scale nuclear war. The 7th Fleet of the United States Navy still fights the communist threat in the East, but Taiwan is being overrun by China’s People’s Liberation Army. As the island faces its deadliest armed conflict ever waged, five unique individuals confront the battlefield before them and the raging battles within their own hearts.

Merdoc and Adrock, are American Navy pilots who experience…

The Antonine Series (Books 1 to 3)

Available on all Amazon websites, KDP Select/ Unlimited
Released as an Ebook/Paperback. 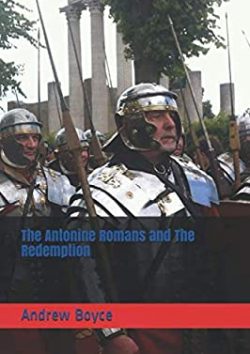 The Antonine Romans and The Redemption

The Antonine Romans and The Redemption
(The third Novella)
Amazon Ebook/Paperback/KDP Select Unlimited
https://amzn.to/3jHW0SY
https://amzn.to/3gbB0RF
Jamis is torn between his Scottish and Roman life. Centurion Andronicus is also troubled. Both men try to find peace within themselves and with the enemy.

The Antonine Romans and The New King

The Antonine Romans and The Golden Torque

The Antonine Romans and The Golden Torque
Jamis seeks revenge on the Romans for the death of his father. Nearing death, he is given a second chance & becomes a Translator for the Romans, seeking peace with the Scottish Tribes.
Available on Amazon to buy as an Ebook/Paperback. Also on KDP Select/Unlimited
https://amzn.to/3hr1gsi
https://amzn.to/3g4ZOdW

The Tragic Life of Julie McNally

A short story about an alternative look at the troubles in northern Ireland.

The troubles is a period of civil unrest in northern Ireland, the republic and Great Britain between 1960 to 1996. when fighting ceased with the good Friday agreement.

In this story, the agreement does not get signed and the British tighten their grip on the north. Julie following in her fathers footsteps takes a desperate and final stand against the oppressors